"When you begin to realize the true weight of your actions....you will awaken to become the person this world needs you to be."
—Ikol to Emily in her dreams

Voice of the stone

Trickery and its way of words.

Ikol (also known the Voice) is a single, enigmatic being that serves as an embodiment of the amulet, mainly as a communicator between the stone and its keeper. As each stone is ultimately created from fragments of the Mother Stone, the voice appears to be connected to multiple stonekeepers – including Emily, Max Griffin and the Elf King– and its involvement in Alledia's affairs is initially greatly questioned. 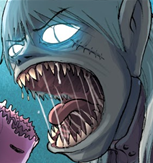 Ikol's Masters fled from it’s dying planet as a result of using up all their resources. Most of the extraterrestrials put themselves into a deep sleep and were cared and preserved for by shadows. Later on, a ship full of shadows and the Voice were sent to find a new world for the beings, which led to the planet known as Alledia.

Later on, as the settlers of Alledia found the power of the Mother Stone, the voice came to be an embodiment of the stones. In a major incident, the Voice possessed its keepers and transformed them into "colossal beasts" that wrecked havoc on Alledia. After other stonekeepers such as Silas Charnon fought to keep the corrupted keepers at bay, only one survived – an elf boy who lived in a small village. The Guardian Council managed to keep him from his stone, and sought to keep him in detainment in hopes of turning him back to normal, but the boy remarked that they would regret their decision in keeping him alive and that he would "show them why".

The boy eventually found his way out of imprisonment and rose his way to power as the Elf King. The Voice is believed to have been greatly involved in the war that soon followed, as the elves of Gulfen inexplicably and abruptly attacked neighboring kingdoms after centuries of relative peace between the lands, leading to a 50 year war.

After a younger Max Griffin experienced tragedy at the death of his friend,  an elf girl named Layra – whose parents were wrongfully captured – and receiving imprisonment after "aiding in the escape of war criminals", his stone's voice spoke to him, in which it offered to help the boy by giving immortality in his pursuit for vengeance. Max agreed and was somehow able to retain his youthful appearance through the stone's abilities.

In a later time, the king had acquired two sons – Luger and Trellis. At an unspecified point in time, Trellis – now a teenager, snuck into the king's chambers at night and viewed a glimpse of his father's face behind the mask in order to acquire early memories, but instead found his face to possess a certain lifeless appearance. The young prince eventually came to the conclusion that the stone's voice found some way to reanimate the corpse of his father and was using his monarchial position in order to instigate its plan behind the scenes.

When Daniel – son of Vigo, as well as a former student of Silas Charnon – attempted to use the stone in order to revive his deceased mother, the boy spent several days in a coma, in which he was heard speaking to an unknown figure presumed initially to be his mother. However, Vigo later concluded that it had been the Voice, not Daniel's mother to which he spoke to, since he talked about things he would never talk about with his mother. David quickly awoke with a fearful expression on his face, before abruptly dying.

Ikol seems to bear the appearance of a specter. Its body is elongated and can likely extend to desired lengths, and its lower body dissipates into a tail-like structure. It is drawn in shades of black, and pink. It seems to posses little to no facial features, but its face is instead covered in an illuminating, pink symbol resembling its stone, that extends to other parts of its body. Occasionally, however, it is shown to have a mouth, though it only seems to display it when pleased, in which it reveals a wide, menacing grin. In Prince of the Elves, however, it was shown to have a second form-that of a tentacled, ghost-like swirling mass of darkness. As of "Firelight", it has been shown that the voice can have a more ghostly appearance, although this could be due to it gaining in more power.

Ikol is very enigmatic in its appearances and seems to maintain relative ease in conversation. However, it seems to be very secretive, especially in matters that involve the voices of other stones. The voice does, however, maintain morals of its own, as proven when it discussed with Max about his past actions, questioning him on whether murdering innocents has given him the peace he seeks. It then proceeds to console him by adding, "Time can heal many wounds, Max. Unless you work to disallow it." It is also known to have a twisted sense of humor as it has referred to Chronos as "Max's faithful steed."

Community content is available under CC-BY-SA unless otherwise noted.
Advertisement